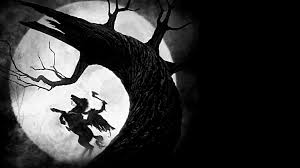 (*Adapted from The Legend Of The Headless Horseman, written by Washington Irving in 1820. I have also taken a portion of mythology from the Tim Burton.)

There aren’t many people that can claim what the Deacon family bloodline can. We know where the head of the Hessian is. You know who the Hessian is. You must know: The Headless Horseman. Yes, that Headless Horseman. My family, 10 plus generations removed from enslavement, know where it is. It was my paternal beyond great-grandfather that saw the Continental soldier blow the head of the Hessian with a cannonball. My great-grandfather, Deacon, joined the Continental army for his freedom. He was in the woods, scouting as the family story says. He saw the Hessian wound other soldiers before the soldier with a belly wound killed him with power and a cannon ball. He saw him fall. Saw the evil slither from him. But yet, he said nothing.

He was too scared to move, but kept watching. The family story goes my great-grandfather watched these soldiers bury the Hessian head in what his own mother called the Han’t Woods. “They buried that demon head deep in that ole black dirt of them Han’t Woods. Don’t nothing come out there alive and talk.” I remember my grandfather, Thomas, telling me this, just like he had told his son: my Daddy. My family, with all it’s other trauma had to keep the secret of where the head of the Hessian lay. The reason why Deacon didn’t say anything was he didn’t want his freedom jeopardized.

My family, both slave and free, came from upstate New York. They knew the legend Irving told, wasn’t a legend. It was a curse. We couldn’t tell anyone growing up. I remember at Halloween how everyone would get a costume, real or imagined, deciding what they wanted to be. I remember being in first grade when we moved to the other side of a bridge in Albany where water was. “Demons and spirits can’t cross water, Avery.” That was the only answer my parents gave me. I had to recite to my grandfather every fall what no to do. “Avery?” I would have to look up at him because he was so tall, and he wanted me to know he was serious. “You remember what to do?”

“ Don’t go in the woods. Don’t let no body know you know the Hessian is real, and is real angry at our family.”

We could have given the Hessian his head back, but we didn’t. My better than 10-time great grandfather, the slave that saw this all happen, his name was Deacon. He could have given him his head back. Deacon could have made all this go away. He could have made us normal. I remember I couldn’t go trick or treating until I was old enough to sprint over Gallows Bridge, over that big body of water called Lake Hollow. Or as the locals call it Hollow Lake. They call it that because of the legend that no one seems to believe in but us.

I grew to hate and fear Halloween. My sister Tamera died drowned when I was 11, and she 16. That’s what the police report said when my parents asked for it. I remember my grandfather fighting with my mother telling her the reason why she died. “She didn’t listen! Tammy didn’t never listen! She dead cause she was being fast!” I remember being so mad listening to the grown-folks conversation from the heating vent in my room. As much as loved my grandfather, I hated him then. I remember the night Tamera went out. I watched her get ready. I saw her do her hair, I saw her put her makeup on. “Ryan and I are going out. I don’t care about some damn curse!” I sat on the side of the bathtub, thinking how pretty she was and I wasn’t.

They were going to see some movie, I think it was last Mission: Impossible movie. “I’ll be back later, Ava.” She had winked at me, and left the bathroom with the ease breezes have. I remember going to the door, watching her jump in her boyfriend, Ryan’s car to speed away. They were on Gallows Bridge, she was halfway home. She was over the water. She was kissing her boyfriend. He is in Bellevue in New York City because no one believed him. He told my parents what happened the night it happened:

We were kissing. My car was on the other side of the bridge. I heard a horse. I heard hooves. I saw Tamera look up. She was scared, and told me to run. We ran towards my car. I parked at the bottom of hill. We ran towards the bridge. She screamed, I turned to go get her. And this big black horse, the red eyes, that was behind her. There was this wind that blew and knocked me out. I opened my eyes and…her head was…gone.

He said someone pushed her in the water after they took her head. She was found in a similar fashion as my grandfather’s brother, my great Uncle Tuck. Drowned. But he had no head. They didn’t believe Ryan, and couldn’t prove he murdered my sister. They put him Bellevue for three years.

My family knew. We always knew. We kept the secret to save ourselves.

For my sister, for Ryan, for Uncle Tuck, I needed this to be over. I decided a week before Halloween, after my eighteenth birthday I was going to send it, whatever it was back to Hell. Or wherever things like this come from. My grandmother, being the old conjure woman she was, told me the best way to catch a hant is to wait until the sun goes down or right when it comes up. I was going to take my gris gris my she made me and go. I had her garden shovel and my iron nails for protection. It was three days before Halloween, at about 5 in the morning when I woke up. I looked at the ceiling, breathing deep. “I’m going to go Tammy. It’s going to end.” I got dressed in all black, a sweatshirt and pants.

I walked downstairs through the dining room, the kitchen going to the backdoor. I went through the back door, and towards my grandmother’s shed for a shovel. I had my gris gris, my nails and the shovel, making my way towards Han’t Woods. I walked, careful to avoid the bridge, the sun wasn’t up just walking brisk through the leaves as they crunched under my feet. I jumped when I heard a horse neigh. I waved to Mr. Curtis as he walked his horses. “Morning Avery!” I smiled back, thankful he didn’t ask me what I was doing.

I remembered what my grandparents said as I wandered towards the oak and elm trees. I knew the tree had to be big, it had to be old, and the soil around it had to be soft and lose. My stock were all farmers, people of the earth. I closed my eyes and prayed to my great-great grandpa Deacon—begging him to help me. It got colder as I walked, I forced my eyes open and saw Han’t Woods. There was a little light that came through. It was graveyard dark, and I felt my mouth go dry. I closed my eyes and felt a hand dragging me, hands wrapped around my own, allowing me not to fall. I felt hands at my back, and still colder. I kept my eyes closed, scared out of my mind, willing my heart out of my throat. I kept walking, heard more leaves under my feet. I kept walking, I felt my feet begin to get tired. I saw the tree before my eyes ever opened. Big, old with the earth around it almost swept clean like something had come in and made its home there. It had to be three hundred years old.

I shifted my shovel in my hands and started to dig, “Grandpa Deacon, Uncle Tuck, Tamera, help me.” I dug, kept digging until I heard wind. It was like someone threw something at me. I was blown against the tree. I couldn’t see. Dirt and leaves blew everywhere. I looked up and saw I was knee deep in the hole I made and hadn’t found a head. I dug faster needing the world to stop. I started praying, closed my eyes, feeling my hands go raw from digging. I hit a something, and opened them. The wind still blowing. I opened them to see skeletons, all without heads. There was at least four or five there! I dusted dirt from them, and found a piece of a red dress. “Where is it?!” There was more wind then and I heard hooves. They were furious and hard like rain. I climbed out, trying to remember my way home.

I climbed out of my waking grave, to see it. The horse was charcoal black, and there was no rider’s face I could see. I could see no head. I climbed out and thought the horse could smell me. I left the shovel and started to walk slowly towards the direction of Gallows Bridge. I heard wind, and began to run. I turned over my shoulder, and saw this horse turn. I screamed as I saw the rider clap the reins.

I ran towards Mr. Curtis’s farm. I screamed as I ran, feeling my lungs burn. The bridge, I had to make the bridge! I turned and saw it gaining on me. I willed my legs to keep going, closed my eyes. I stumbled over what felt like a bolder. One of the nails was in my hand, and I felt my hand warm with the heat from the spilling blood. I got up, slipping and saw the bridge. I felt something push me onwards, and ease once the planks were under my feet. There was fire in my chest, as I kept my hand over my heart. I heard the horse neigh in anger. I spurned to its legs in the air, the rider still seated and silent.

It turned from me, galloped towards the tree I had come from. I had dug on the wrong side of the tree. And I had no way of knowing if I came back, I could get back to the bridge. I was no better than my great-grandfather. I, too, decided to save myself. I made my way home, soothed by the steps over the bridge and the water beneath it.

[Image from The Movie God, Geeks of Doom]