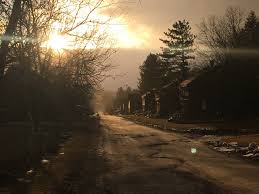 For as long as I can remember, my life has been with the dead. My grandmother made elixirs, gris gris, and mixed oils to ward off spirits. Before my grandmother, Illa, died she started calling for her grandmother. “Mama, Mama!” She would say, with her hands outstretched when she would be laying down in bed. For a year, I had watched my grandmother, my Nan, go back and forth from the land of the living and the dead with only ceiling fans to talk back to her.

I remember hearing my mother and father talk about Illa, in hushed tones and in behind closed doors. One night, maybe about six months before my grandmother died, I heard them fighting downstairs. It was the slamming of a door that woke me in my dark room.  My father was reluctant to but his mother in a home, and my mother voiced that she feared her. “She is in the back room calling for dead people, Curtis!” I heard my father defend his mother again. “She is still my mother, Elle! You know why I can’t send her away!” There was silence, and my mother spoke again. “Not this damn bloodwork, not these damn curses!”

I felt my forehead wrinkle. I knew a little bit ofwhat the bloodwork was. I knew what it meant. I heard my grandmother mention it with her friends she quilted with before this last stroke. Sometimes she let me sit at her left side, and cut material with her good shears. “I know the they don’t want me here. That Elle scared of me.” When the older women talked like that, I knew my then ten-year-old self would be removed from aroom. There was a collective silence before she spoke again. “I don’t care she scared uh me. I got work to do. That girl my grandson about to marry ain’t worth nothin, but this blood work gon keep him.”

My grandmother had told me about the bloodwork. How there was power in our blood, in our bloodline. There was something in us, from grandmother to granddaughter that made us different. It was this year, the year I turned ten, which she let me know how different I was. “Maharet,” she’d whisper, her drawl evident as noon sun, “you special. Soon, imma have to teach you how special.” She would sit in her room and sew, cutting patterns and quilt pieces. When she pricked her finger, she would wipe it on a piece of white linen she would cut up later. “The blood is precious, Maggie. Don’t ever waste it. It can kill, curse or cure!” She pointed her bony finger at me sitting on the beige carpet floor.

On good days, she would be up at her sewing machine making pillows. Or surging hems around curtains or tablecloths. My oldest brother, Ernest, had her make his fiancée’s veil in October for their wedding in December. He thought she would be alive at least until the New Year.  “She too mean to die, Peggy.” He laughed when he brought the tulle to her. He walked over to me, his shoulders squared and his back straight as he brushed my shoulder.  “Sewing always gave her something to do. This project will keep her focused. Daddy is worried about her mind being idle.” He looked away from me as I sat at Mama’s big dining room table, doing my math homework.

Idle. He said that word like there was vinegar attached. I remember getting up and walking down that long dim hall with the panel walls. I put my hand along it, anchoring me between the ceiling and the floor. I heard humming as I got to the end of the hallway off the kitchen. With all the moxie I could muster as a ten-year-old girl, I exhaled before I knocked on the dented peach door.

I bit my bottom lip, knocking three times in quick succession. I heard more humming. “It still works, it still works!”  I tried the door. Mama told me to never try the door when it was closed or locked. I saw my grandmother with her headwrap on. She wore this long white scarf, piled and tied on her head like a crown. I was mesmerized watching her shoulders and upper arms push towards the fading light of the window. The whirring of the machine captured me.  She was speaking low, and in broken Creole. I didn’t know much about my great-grandmother, but I knew she hadworked for either a French or Creole family.

I knew the grandmother before her ran away from the master that stalked her and her younger sister,before the Civil War. My grandmother Illa told me they were able to get away because she ran through the cane fields from him. Her younger sister drew a circle in the field to trap him, sealing him in with the blood she left in the soil. I knew he died from exposure and what his family called consumption. It was the food my great-grandmother made that killed him.   I knew that my great–grandmother had learned this language and told all her children. In turn, they told their children.

I knew that my grandmother was dying. But that didn’t scare me. Her not being in the house I was in raised in didn’t scare me. Not being able to see her didn’t scare me. This, this dying she was doing, scared me. It seemed to have no rhyme or reason. She would be fine and then what seemed to be sick or paranoid. The whirring of the sewing machine got louder, matching the thumping of my heart in my ears. “Just like that Mama?” she asked to the room and light beyond my own sight. She hummed the hymn again. “it will never loose it’s power.” She turned and faced the wall where her dresser was. She had her good sewing shears and nipped her index finger. I heard the whizzing and whirring of the machine stop. I watched the black housedress she wore transform into the robe for a queen from the stories I read. The big white magnolia flowers matched the white crown she wore.

“It will work, Mama. I’m leaving soon. It must work!” She turned back to the veil she created. My feet, glued to the floor. I willed them to move and could only twitch my toes. “Maharet!” She said, a harsh whisper. “This is blood work I’m doing. You can’t see this. You can’t be seen seeing this yet.” The sewing machine whirring again. I saw the tinted white fabric. She spoke the broken language again, louder, then screaming in the empty room. “Mama, it ain’ttime! It’s not time.” More whirring. She muttered, she always muttered when Mama forgot to give her the tea she made for what she called her ‘confusion’. “Protection. They won’t get him.  Not through this line. No.” I still couldn’t move. The whirring and heartbeats deafened me.

My grandmother took a deep breath. Her shoulders slacked. “How does it go, Maggie?  Sing it for your Nan.” She often had me sing to her on nights she couldn’t sleep. I sang the song; the same one I had snuck in to sing nights before because she was screaming for her long dead father.

It will never lose its power.

I saw her shoulders slump, as she fell backwards from her sewing stool. Fingers bloody, the veil falling over her. I couldn’t move still. I watched her eyes flutter to the ceiling and then close. The room was quiet again. My feet unglued from the floor, as I moved over to her. I don’t remember screaming or crying but going to her, kneeling by her right ear. Her eyes shot open, and she grabbed my hands. With her bleeding finger, she smeared her blood over my eyes. My grandmother wouldn’t let me go, her grip tightened around my wrist. She started me and past me, chanting. I began to cry, scream, called her name. She wiped her hands over my face, focusing on my eyelids and lips.“Nan, Nana Illa, let me go!” She chanted and looked past me as I felt my eyes and face itch from the blood that was on it.

“Finish it!” I heard a voice say, warm and firm. “Let her see!” My grandmother went back to her supine position, eyes looking to the ceiling. As I pried her hands from my wrist, I heard my name. “MarharetIlla.” I was scared to turn towards the door where I head the voice. There were three women standing there, tall and regal looking their eyes sullen and dark. One moved closer to me, and I felt my body freeze again. “You can see me, and I can see you.” She blew her breath on me, assuring me this was no dream. “Your blood is my blood! You are now  ours.”

*This is a novel start. Aren’t you lucky to get a preview?