Admin note: There is language used in this piece some may find offensive. The author of this piece as well as the admin/founder of this blog are St. Louis, MO natives. All personal details discussed are of the contributor and have been approved by the Admin. Don’t email me for nonsense about what my team wrote. Miss me. JBH 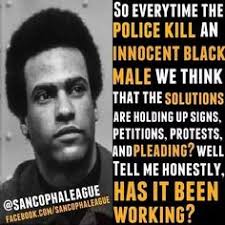 This is a story all too common in the black community.

Policed by majority white Americans who have no knowledge or understanding of what it is to live in “high crime or ghetto” communities (Oh, sorry–I meant majority black communities!).

The products of these encounters are as follows:

Those  same constraints that entrap us all and then–silence! At least until it happens again. It always seems to happen again.

The true definition of insanity- doing the same thing, expecting a different result!

We as African/Black Americans run the risk of living a Ferguson situation everyday! Do you remember where you were during this time in August 2014? Well, I remember exactly where I was. Across the street at the Russian-owned meat store!

Now, I have to admit. I lived in Canfield Green Apartments. My address was  2949 Caddiefield Road. I still carry my driver’s license with me from Saint Louis just to keep a memory of where I came from.  I was leaving the meat store about to drive through the apartment complex just to visit some people I knew who lived there.

Then I see it.

The body of Michael Brown, Jr.–his body lying on the ground.

Don’t get me wrong, I’ve seen plenty of dead bodies, but it was different. It was different because this one inspired an outcry of people. Mad, angry, frustrated people! These mad, angry, frustrated people in yet another racist situation, this time created by Ferguson Police Department. What happens next was recorded by the national media–the Riots!

During this time, I lived in Kansas, where I currently live. I stayed in Saint Louis while all the unrest was happening and just to keep an eye on family. I thought everything was going to calm down after a couple of days.

Boy was I wrong!

I was on my way home back to Kansas driving past Veterans Memorial Parkway on I-70 West, when I get a disturbing call from someone whom I consider a niece. 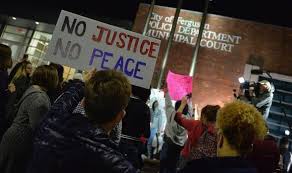 Niece: Auntie, there are people who are everywhere. All in the streets! I’m looking out my window and QT is on fire!!!!

Niece: I’m really scared and I don’t know what to do!!! The are police everywhere! People breaking into houses!

Me: STAY AWAY FROM THE WINDOWS!

Niece: I don’t know what to do! (crying hysterically)

Me: Hey! Calm down I will be there as soon as I can!

It only took me about 15 minutes (Yes, I hit the road. Yes, I was driving about 140mph!) to get to Lucas Hunt and West Florissant. The streets were piled with people and police barricades. I literally had to walk on some sides streets to get as close to the apartments as I could. After about 30 minutes, I had just made it to West Florissant and Canfield.

What I saw: TOTAL OURTAGE!

Not only did my heart break for the city I was born in, but the people and the businesses. It broke for all the people who had been victims of police brutality and racial discrimation. I was broken because it’s a shame that the only way that we know how to show activism in the world, is through rioting and walking protest.

We haven’t realized that the best form of protest is by spending money with your own.

We have become so used to not having that we don’t care what anyone else says!

We don’t care that companies talk about us and say that we are ‘niggers’, ‘stupid’ and ‘incapable’ of learning anything new.

We have become accustomed to thinking we are lesser than. We still can’t live or survive without them. This is what broke my heart at watching my brothers and sisters break in houses, burn businesses, get beaten and arrested by the police (or the PO-LEASE(poor people lease/lease the poor people)! This is what broke my heart hearing my niece crying on the phone, in fear that she would be hurt soon.

Me: Hey what’s going on? I’m coming down the alley! Don’t open the back door until you I call you!

Niece: I hope you hurry up! They are now kicking in doors by the house!

This is the night I had to teach my niece to use a shot gun in 2 minutes.

It’s a shame that this is the memory that she will have about having to defend herself or scare people away from her home. The aftermath of Darren Wilson killing an unarmed Black man is not the first impression, but one of countless major impressions that police brutality to black people is nothing more than something to do!

Are we worth less to our white counterparts unless we are sucking our heads and saying “Yes Sir, Boss?”

You want to be a part of Activism that is effective and lasting : KEEP YOUR MONEY IN YOUR POCKETS AND SUPPORT BLACK OWNED BUSINESSES!