Mike Brown means we got to fight back!

The thing that has always bothered me is his police car has never been found or examined. I will go to the grave saying the reason why the former Ferguson police chief  (whom my husband and Facebook friends nicknamed Struggle Chief) and Chief Belmar waited so long to tell what happened in this incident and give his name in the local, then national media was to get Darren Wilson out of St. Louis.

You can’t tell me otherwise, and I’m not going to argue about it.

I said what I said. 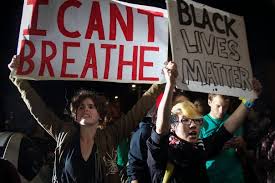 I remember the day this happened, and the feeling of being utterly hunted by the St. Louis County Police Department. I knew by living in St. Louis ‘the county’ was a totally different animal.

I have lived here all my life. This was not new information. What broke my heart was this child, this young man, was left in a street, bleeding and shot for hours–to have his mother provide a semblance of dignity by bringing a white sheet for him to be covered by.  Police would not even let her see him.

All of me that was black and woman grieved with her. If her son didn’t matter, and could be discarded–so could my children. So could my husband, my brothers and godsons. All whom are black. His death confirmed what I had heard my mother tell a saleswoman in a Macy’s when I was in my early 20s:

If we not careful, it’ll go right back to the way it was…

It will go right back to the way it was.

I remember having knock down arguments with my Texas-bred husband about the motive of this crime. I told him it was about race–he didn’t believe me. I had to give him the crash course on police interaction in St. Louis County. I had to tell him the police in ‘the county’ (as the native St. Louisians call the area outside of the city limits) harass black people because they can.

If they see a lot of black folk in a car, you will be flagged. Most of police in North St. Louis County don’t aim to have respectful conversation with you when you get pulled over as a minority.

It’s always about race in North County. There are so many non-melaninated officers here whom see black skin as a weapon and the wrong look at them to be a threat. The reason Michael Brown, Jr. is dead is because he looked at scary white officer.

I said what I said.

He had the car, the badge and the gun. What and how was his life in any immediate danger? 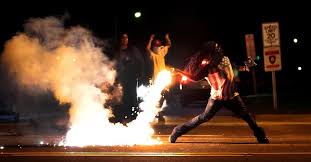 The breakdown in Ferguson (I refuse to call it a riot or looting), happened within 5 miles from my apartment.  I saw the QuikTrip burn. I saw on local television windows break and people just were wildin’!

I saw the military grade vehicles on West Florissant. I saw people get tear gassed, people running up West Florissant from flash generates. I saw black people have guns pulled on them for only existing and buses refusing to run through Ferguson!

I saw more police than I ever want to see ever again and began to watch them watch me more when I drove.

I was a refugee in a occupied state. Twitter was sometimes the only way to know what was going on!

I saw all of it–and in awe. I, as a writer, had words–that goes without saying. But the lifetime St. Louis resident was just like, “Good.”

I don’t regret feeling like this–it was brewing for generations. This resentment, this rage and it resulting in “I can’t give a fu-ck anymore! I’m tired!” I saw the protest on television, fielding calls from my mother begging me to not go out and protest. I had to deal with my husband asking me to just stay home because, someone has to be Coretta right?

In speaking to my mother on these matters, she told me not to beat myself up if I can’t do as much as I would want–she told me to do what I can or could.

I could be a sounding board.

I could help organize in my ministerial circle.

I could become more vocal and more vigilant.

I could record the police.

I could go out when I could.

I could follow on social media and break up craziness in my own circle regarding these issues of race, blackness, police brutality and white supremacy.

There are people whom I have not spoken to in four years because their views became known and they were diametrically opposed to anything that looked like right.

There are people I haven’t spoken to because they chose to be silent rather than fight. There were clergy I lost respect for because I saw how they used this tragedy for clicks, likes, shares and money!

I was accused of hating the police.

I was accused to being racist myself.

I was accused of hating white people.

I was accused of being out of pocket because I thought faith had a place in activism.

I was told by my church leadership that my husband and I shouldn’t talk about social justice, let alone preach it!

When my husband and I tried to call churches to pray and work together in Ferguson, no one wanted to meet or talk. Or, when the hubs would call, he was told, “We don’t know what to do.”

We became more active on social media. We tried to be a support to anyone that needed it. We even thought about making our apartment a safe house, since our church was. We became more vigilant participants in outreach ministry. I started the 2911 Initiative at our church in order to provide emergent needs to people in the community whom needed it.

The goal, our goal personally and as well as for ministry, was to be a help, provide support and be present whatever that looked like. The strangest, most dystopian thing in the aftermath of this is police murder was the people I have met. The conversations I have been privy to, and the rooms I have been invited into.

My life has become richer in the aftermath of someone dying–and I never forget that. That humbles me and is heart-breaking. In this movement, there is work to do. There is always work to do–and you don’t always need to be seen doing it.

You don’t always have to broadcast what you’re doing. One thing this movement has taught  me is you can always help someone whom you see trying to change the world.

David stunned the giant with a rock before he cut off his head with a sword. Don’t ever think doing a little thing will never work. Find something for your hands to do. Now.

In reviewing the cost of activism, click *NO DAYS OFF (For US).