I was 20 when I was introduced to Ms. Dorothy Jean Dandridge. When I found out she had been dead forty years at the time I was introduced to her, something in me broke. I new who Marilyn Monroe was, and the cult following she had and still has. But I adored Dorothy. When I saw her in Carmen Jones? She became my spirit animal!

In seeing her in a movie full of all this radiant black talent, edified the little black girl in me who only had white Barbie dolls until she was about 9. Even then, I had more white Barbies–and thought they were prettier.

Because I thought they were prettier.

I was a whole adult before I could be confident ‘in my pretty.’ Even born in 1981 had not erased colorism from what I saw around me or what it meant to ‘be pretty.’ In my formative years, I was awkward, bookish and artistic. I had acne and really nappy (read:  kinky) hair. I didn’t fit any esthetic. I couldn’t. With the discovery of film noir, I noticed how many women looked like my mother, my grandmother–who looked like me. The brightest star was Dorothy.

I memorized Carmen Jones. I watched the minutia about Dorothy in this movie and worked her lines in regular conversation with dudes that had no idea how sweetly I was telling them to leave me be. I never found the cult following for her. 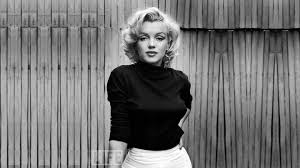 But for Dorothy? No. I watched Introducing Dorothy Dandridge every time it was on.  I started wearing a red lip again because of her. I was committed to loving myself again-as a black woman, then as a woman. I had to embrace all my melanin offered. The world around me didn’t honor it–but it sexualized it as fetish and fantasy. I am seen as a being that can offer unique sexual experiences. Hell, in Monster’s Ball the correctional officer’s father told Leticia after she brought over a present saying. AND I QUOTE, “You ain’t a man till you split that dark oak!”

As a black woman, what do you do with that? How can you reconcile in a world that wishes to be you, redefine your blackness, and tells you that you aren’t good enough all at the same time?

The key is self-acceptance. The key is to realize the lie that is colorism and white supremacy. It’s goal is to never make you feel enough, worthy or comfortable. You have to be able to confront this hurt in order to free yourself of its consequences. I couldn’t idolize Marilyn, because I could never be her.  As a black girl, I could never be a white woman–and that just had to be okay. 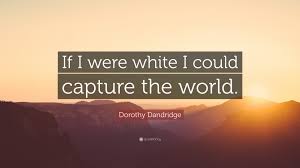 I could, however, take my queue from Dot. I could love, be glamorous and radiate beauty and light wherever I was no matter who didn’t like it.  I could be unabashed in who I am–I didn’t, I don’t have to be Marilyn to be beautiful. The walls, fences and shenanigans the have been constructed to stop me and all my blackness I  have to be bold enough to see and break through.

Dorothy Dandridge died in the  prime of her life. With so much left to say, do and conquer. With her as an ancestor– a patron saint of ambitious, pretty black girls–how can I be stopped?

Marilyn can’t do that…